The green bucks have been facing intensive bearish pressure in the global market after Mr. Trump become the newly elected president in the U.S economy. Though the dollar index surged up to its 14 years high in the global market, the extreme level of negative consumer sentiment due to commitment failure of Mr. Trump regarding fiscal the increment of fiscal spending pushed the dollar lower in the market. On the contrary, the economic performance of the Australian economy was much more stable and the investors made a decent profit by entering long in the AUDUSD pair. Though the overall long term trend is still bearish the medium term uptrend created some unique opportunity for the traders to make some safe bucks in the market.

Let’s see the daily chart of the AUDUSD pair 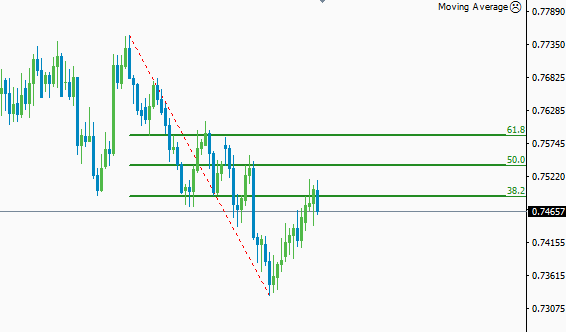 From the above figure, you can clearly see that the long-term downtrend in the AUDUSD pair is still intact and currently the price has a false breach of the 38.2 percent Fibonacci retracement level drawn from the high of 20th March 2017 to the low of 9th May 2017.Some of the aggressive investors already went short in the AUDUSD pair after spotting the bearish pin bar right at the 38.2 percent Fibonacci retracement level in their trading platform. Though the current performance of the U.S economy is significantly weak the dollar bulls are still holding the ground in the global market due to the possibility of projected rate hike in the year 2017.

Technical levels in the market

Currently, the AUDUSD pair is testing critical resistance level at 0.7491 and a clear bullish break of the bearish pin bar in the trading platform will confirm the resumption of medium term bullish correction in the Aussie dollar. In the eyes of the trained professional, the Aussie dollar might surge up towards the 61.8 percent Fibonacci retracement level and a clear break of price above that level will confirm the medium term bullish reversal in the market. If the price manages to breach the 07584 level then we might see a retest of the high (0.7747) of 21st March 2017.The critical resistance level at 0.7747 is going to provide a significant amount of resistance to the Aussie pair since most of the big players will be waiting to short the AUDUSD pair with the bearish price action confirmation signal. However, if the current resistance level manages to cap the recent bullish movement then we will see a sharp drop in the AUDUSD pair towards the next critical support level at 0.7332.

Fundamental analysis: Fundamental the Aussie has very little to do as the week is heavily loaded with U.S high impact news release. The Upcoming FOMC meeting minutes will most likely create a high volatility in the market and professional traders will look for selling opportunity in their trading platform with proper risk management factors. If the FED manages to hike their interest rate on the basis of 25 points in the global market then we will see a strong comeback by the mighty dollar bulls. But a delay of pending rate hike decision will weaken the dollar Furthermore in the global market. However, an imminent rate hike with a dovish statement will neutralize the bullish strength of the green bucks in the global market.